...ndid, the somewhat small but happy love child of Nicolás Delfino. A company specialized in interactive websites and rich media applications, knee deep in actionscript and down with jazz...

I love writing down work stuff on lists just so I can check´em off when I´m done (dont we all?)

Anyway, for a long time I did tons of ugly lists in notepad until one day I found a great little AIR app called Doomi.

Doomi´s been my favorite task manager for a while now, basically it´s a small good looking window that lets you insert tasks and check them off when you´re done with that particular task. A nifty little app , the only thing this little bugger´s missing is some sort of sync with either mail or iphone.

So for those of you in need of a great task manager with backup and seamless iphone sync, look no further! 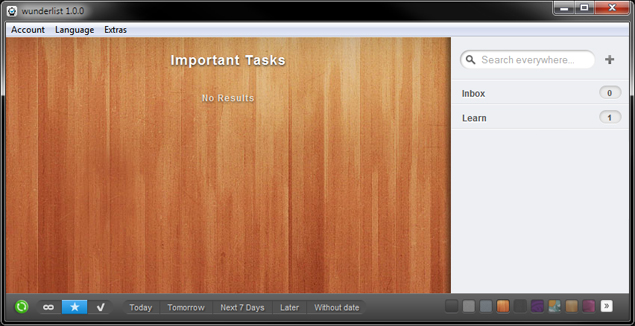 You really cant ask for a better free task manager than Wunderlist, right out the box you have options like creating a wunderlist account for synching with their servers, categorize lists for different projects, set due dates, stars and alot more.

And for those who likes customizing you get over 10 high quality backgrounds to play with.

The free Wunderlist iphone app is equally impressive and has the same slick interface as the desktop version.

The functionality is the same letting you edit, remove or add tasks, lists etc. all synched through your wunderlist account.

A basic introduction to the awesome game platform Scoreoid

A video showing me playing around with the awesome amfphp framework

So as I wrote last week I looked into the cool sound framework SiON, hoping that it would work as a sound engine on mobile games What flash genius Terry Patton predicted was true, the framework – though small in size, is a huge burden on a mobile processor… Anyway I recommend to check it [...]

The game was initially published as a flash game on MySpace 4 years ago where crazy jazz guitarists and classical guitar virtuosos competed against each other for the highest score. This version shows a fully blitted game running 52 fps on my Samsung Galaxy S and modest 48 on my old iPhone 3GS Actual device [...]